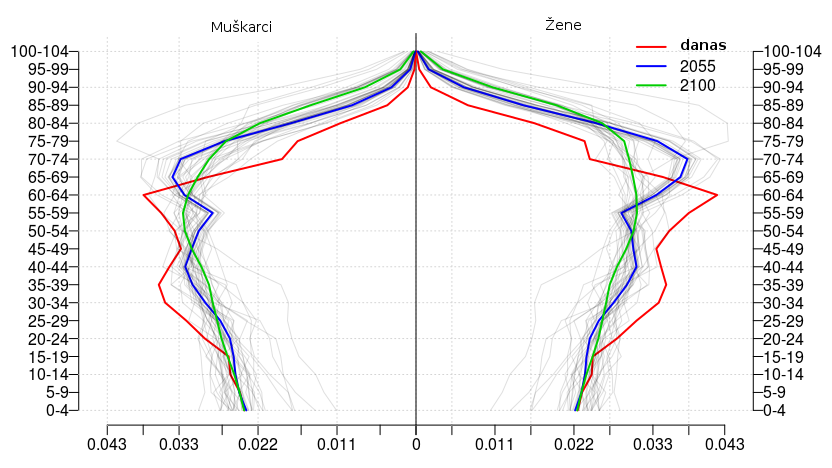 Source: The pyramids represent the results of probabilistic population projections in Serbia (excluding the data for the Autonomous Province of Kosovo and Metohija) based on the current UN WWP 2015model. It represents the current age structure (red line) and the most probable projection in two time intervals: mid-21st century (blue) and late 21st century (green); Author’s contact: v.nikson@gmail.com


Activities: The Centre’s work focuses on gaining complex insights into the situation, tendencies and problems of the population in Serbia and its environment. To that end, the studies include all phenomena of demographic development, its tendencies, determining factors, shift patterns and expected changes in the foreseeable future. Particular attention is paid to identifying and researching the development of the population in Serbia and pointing out any possible demographic, economic, sociological and other impacts in the domains affected by the population factor. The range of topics researched also includes the spatial and ethnic dimensions within the phenomena where they significantly cause their manifestation. The findings of quantitative and qualitative analyses, including those acquired through in-depth research, serve as a source of the knowledge needed for improving theoretical and methodological frameworks, but also as efforts to guide political action in this domain.


Aims: The aims of the Centre were declared at its founding in 1962. They include: research of the population’s development, promoting demographic knowledge and developing scientific methodology in this domain.

* This estimate (excluding the data for AP Kosovo and Metohija) is based on the definition of the usual resident population from the 2011 Census, including corrections for the population in the south of Serbia, who boycotted the census, and corrections for the census error of overestimation of the total population; it is based on changes in the natural birth rate and migration net balance in real time | Author’s contact: v.nikson@gmail.com